The archaeological area of “La Cuma” preserves the remains of a roman sanctuary built starting from the middle 2nd century BC, and then it went through different building phases until being definitely abandoned in the first half of the 1st century BC.

It is a place of worship having three main buildings that are situated in a hillside which serves as terrace with a temple dedicated to Jupiter at the center.

Not much of this temple is preserved. The diagram is still undefined, but it had for sure decorations made of architectural terracotta on the roof, and sculptures made of painted terracotta on the fronton. Over the years the building went through collapses, abandons, and interventions in the modern age which affected deeply the perception of the visitator.

Despite all this, an important factor is that in the two other buildings significant fragments of painted architectural terracotta were brought to light. A proof that, added to the monumentality of the portico’s columns, makes us understand the nature and quality of these structures, and of all the complex.

Behind the temple, there is a preserved monumental colonnaded portico over 62 meters long, with Doric and Ionic-Italic fluted columns made of sandstone, dating to the second quarter of the II century B.C. It had a function of retention of the hillside, and a scenographic function, in line with the Hellenistic architectures that right in this time spread in the Mediterranean area.

At the beginning of the 1st century a small building called “Building C” was built right in the west of the temple. It is a sacellum, in other words a small temple, dedicated to a minor worship (in all likelihood Hercules), as suggested by the architectural terracotta and pottery remains discovered in this area, with an inscription to Hercules.

After being abandoned for centuries, in 1957 the first discoveries of the collapsed columns of the main portico started by chance. Thus, the excavation campaigns begun, and they were followed in the 1960s by the reconstruction of the portico columns and many walls, destroyed by excavators to recover the fragments of statues and terracotta decorations inside them. The history of the excavations at “La Cuma” limped along up to the 2015, when a new research project (still ongoing) was launched by the archeologists of the University of Bologna and of The British School at Rome.

The temple of Jupiter 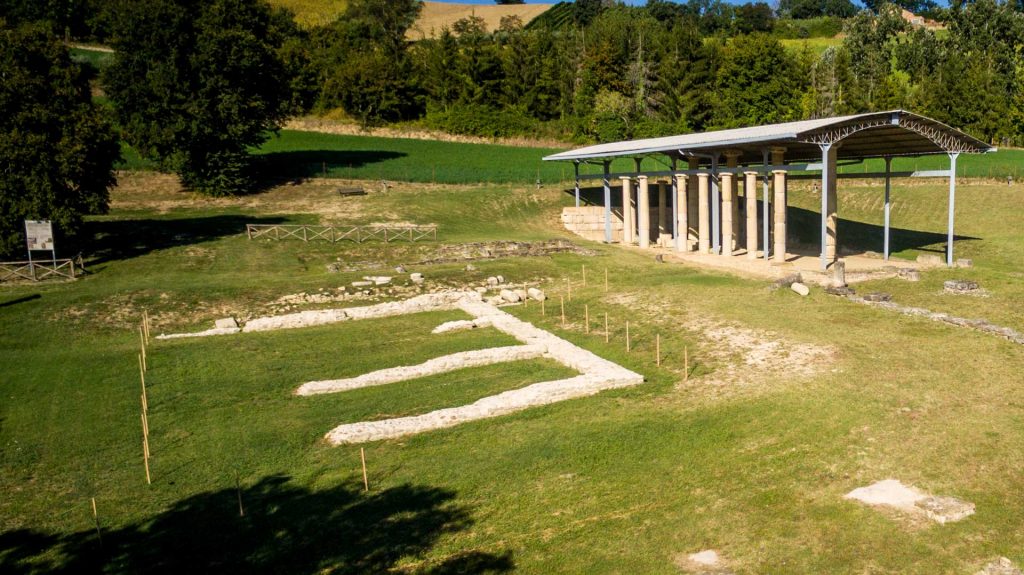 The temple was built at the center of a square surrounded on three sides by a portico, an it was raised on a podium covered by sandstone slabs, of which some blocks are still visible on the northern corner.

The remained structures belonged to the foundations of the temple. They were underground formerly to sustain the walls, unfortunately lost nowadays, but it is still possible to imagine the shape of the building thanks to their positions.

The temple was dedicated to Jupiter and counted four columns in the façade (tetrastyle) through which you could access a main room with the statue of worship (cella), and two other rooms at the sides.

The visible part of the roof was covered by painted and decorated terracotta slabs, while the triangular space under the two pitches (fronton) had a series of terracotta statues telling a mythological episode linked to Jupiter.

The slabs were decorated with the thunder, the main attribute of Jupiter, or with plants, while in correspondence with the roof tiles there was a depiction of a woman taming some wild animals (antefix with Potnia theròn). This latter is an ancient theme that the roman religion compares to the prerogatives of Diana, daughter of Jupiter, the goddess of the hunt and animals living in the wood.

The temple went through at least three building phases, and most of these terracotta decorations were reused during the last reconstruction of the temple: the collapsed parts of the building were used again to build the walls, so that, at an ideological level, the old decorations were ritually returned to the deity when they were replaced with the new ones. The study of terracotta decorations allows to reconstruct the different groups related to the temple’s rebuilding during the 2nd century and the 1st century B.C.

At practical level the worship entailed a rituality in which food and beverage were offered to the deity, using pottery cups too (especially of the black-painted typology). These latter were attributed to Jupiter with an initial engraved on the surface, and they were discovered by the archaeologists right in this area.

In the northwestern corner of the square a small temple dedicated to Hercules and lacking in columns, was erected. The Latin initial of his Latin name (H) was engraved on a cup used for the worship, while the hero was depicted on the decorative slabs of the roof, as well as the lion, animal linked to one of the famous labours of the son of Jupiter (the Nemean lion).

The building is structured in more internal rooms housing also a cylindrical basin in travertine and a floor made of cocciopesto, elements that make us hypothesize the use of water for ritual purposes.

This building also underwent some transformations up to being abandoned during the 1st century B.C, when it was reused as funerary enclosure judging by the tombs brought to light by the archaeologists in the 60s.

The sacellum of Hercules 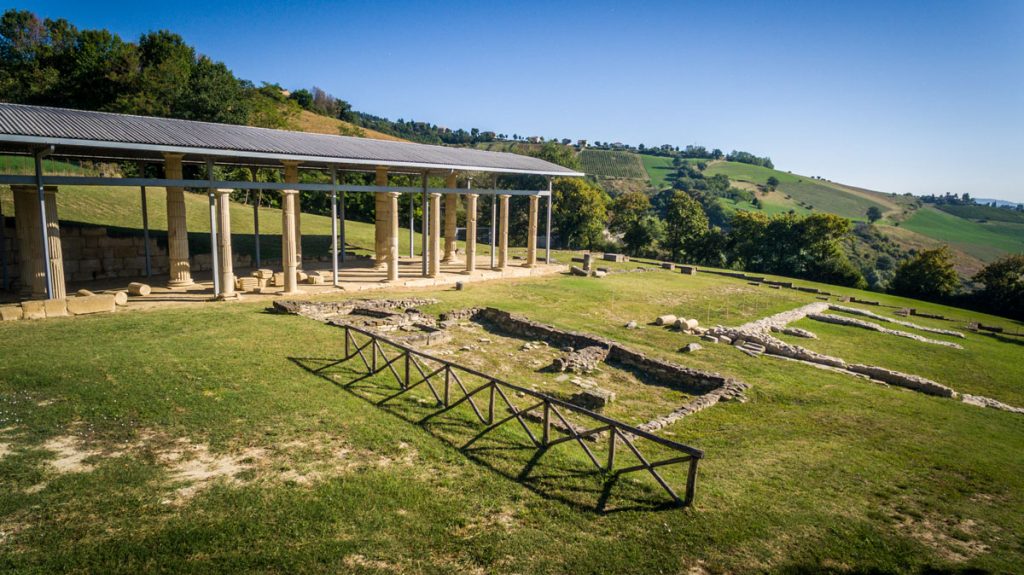 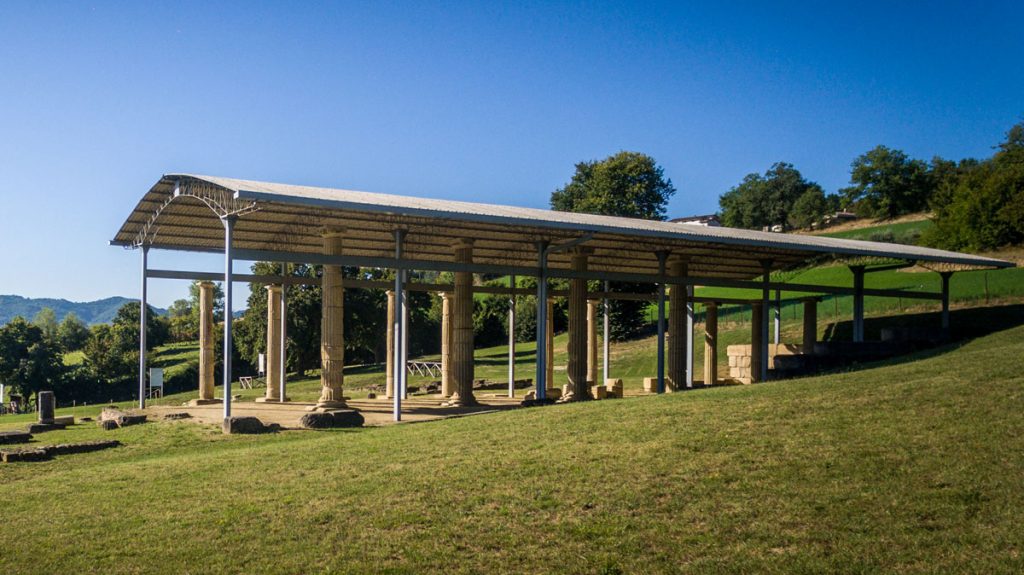 Behind the temple, there is still nowadays the remains of the main portico with a Doric colonnade of eight columns in the façade formerly and a central row of thirteen Ionic-Italic columns. The material used for the columns is sandstone which abounds in the area.

The rear wall, made of sandstone squared blocks too, was also used to retain the hillside behind the temple.

The portico was built in the 2nd century B.C but it was necessary to rebuilt it after the middle of the century, with the addition of a wing on the right side of the square, intended to house spaces for commercial activities (tabernae). A third building, still under study, delimitated the square on the other side. Around the middle of the following century two halls were added to its extremities which could be accessed by passing through three Ionic columns of lower height than the central Ionic-Italic ones, framed by lateral pillars.

One of these halls was rebuilt during the 60s on the northern corner.

The portico was also decorated with painted fictile slabs similar to those of the main temple. As well as serving as scenographic background, the portico was used as a covered space useful to celebrate not only religious ceremonies but also events linked to the administration of justice, or to other civil or commercial circumstances. Indeed, the sanctuary was the only public monument of the Aso Valley, a rural district lacking in cities, and therefore it represented the main pole of attraction of the Roman colonists who lived in this territory.